*The photos are by Glenn Tachiyama. See more of Glenn's photos here*

I left work about 45 minutes later than usual on Friday due to an accident that blocked our Access Road. The plan was to get home, shower, throw my stuff into the car, eat and drive to Anacortes, WA. Not too tough. Everything went as planned and I made it out by 6:30. The drive was easy and I arrived near the ferry at 11:30. I parked, crawled into the back of the Element (yes, I upgraded from my little Subaru), and went to sleep.

At 4:45 my alarm went off. The first and only ferry that would get runners to Orcas Island in time left at 5:30. The plan was to meet Seth Wolpin on the ferry, he’d hop into my car and we’d go to the race. Seth was hanging with Von, who joined our posse, and we cruised from the ferry to Moran State Park. Von took the early start that morning, so upon arrival she grabbed her things and darted for the start line. By starting the race an hour early, Von would probably finish in time to catch the earlier ferry back. Smart lady.

All the normal time starters were hanging out, eating, chatting. I bumped into Jim Norton before the race and we lined up in the starting area next to each other. Something spurred me to mention that one year earlier, we were standing in that exact spot. Apparently I was acting too chick-ish for Jim and he commented with, “Oh that’s nice. You want to hug it out? Maybe we could sing ‘Total Eclipse of the Heart’ while we are at it.”
I rolled my eyes, then started up, “Once upon a time I was fallin’ in love.”
“Oh god,” Jim laughed. The guy next to him found it funny too.
“Now I’m only fallin’ apart.”
“Alright, alright.”
“Thanks to you, I’ll have that song in my head for the entire race.” I had forgotten my headphones and so I was stuck with my internal soundtrack for the entire day. As it turned out, ‘Total Eclipse’ was in my head for more than half of the race.

Straight off, I held back. Last year I started out too quickly and ended up having serious stomach issues, energy problems, and had to drop out. Jim had made some early passes and was somewhere ahead of me. I ran with several different people in the first ten miles. One person, who will be called Mark ran with me for a while. We exchanged good mornings and all that. Mark told me he was from Idaho. I told him I lived in McCall in the summer. He went on to tell me about his previous knee injury and how he hoped the day would go well. He did a race two weeks earlier that went well, so he was figuring Orcas would be fine. I wished him good luck as our paces caused us to split ways.

I got to Aid Station #1 in two hours and after it the trail started steeply climbing. The Powerline Trail is infamous for ruining people. It is also something that people show up for specifically. In my memory it wasn’t all that horrendous, so you could imagine my disdain as the trail turned and went damn near vertical. The trail section gains about 1500’ in less that two miles. I passed a girl near the steepest part who asked me if we were nearing the top. I responded with, “No. Not even close. Whatever you do, don’t get your hopes up. The knoll above this one isn’t the top. Neither is the next one. Just assume you keep going up and up.” She wasn’t entirely thrilled with that answer, but I wasn’t going to lie about it.

Yet again I found myself having stomach issues about halfway up. I also started freezing, lips chattering, whole body shivering. Not a good sign when you are in direct hot sun in 40-50 degree weather. I took a salt tab and started eating dates. This helped enough to have me not concerned. Each move up that trail felt like punishment; people scattered all over stretching legs that refused to go upward. I was definitely questioning what I was doing with myself at this point. I knew what I was getting myself into and there is little time for self-pity so I pushed on ahead. The faster the better. An hour after I started up the arduous, soul crushing climb, I reached the top. Running was difficult initially because my muscles were used to climbing. After walking for ten minutes my legs figured it out.

On the run downhill I met Kevin and Michelle. Didn’t really get to talk to Kevin much but this was Michelle’s first ultra race. It was great to run with someone who was brand new to the race scene. She really had no idea what she was getting herself into, but she was doing wonderfully and feeling great. It was motivating and inspiring cause it reminded me of my first ultra. We ran close for 5 miles and chatted a little. I gave her little pointers that my friend Pablo gave me during my first race. Eventually our paces caused us to split ways and I shortly encountered Mark again. “Hi there,” I said.
“Oh hi,” he said and began retelling me his story. I figured this was because he hadn’t realized who I was. I told him I lived in McCall in the summer, trying to spark his memory a little. “Oh, it’s nice there,” was his response. He didn’t remember our meeting earlier, which didn’t bother me. He repeated most of his previous story and I listened until we split off from one another.

The climbing from Aid Station #2 to Aid #3 was glorious. The bulk of it can be run and the views were brilliant. Michelle and I were paired up again and it was nice to have someone to share this part of the trail. We could see the Puget Sound and all of the North Cascades. They really are the most beautiful mountains. After grabbing food at the top of Constitution and taking a few photos, I headed out solo.

The downhill was more brutal than I remembered. At this point we were 23 or so miles into the race. Muscles fairly taxed, energy fading. This makes it hard to put on the brakes. I let my legs move at the speed gravity wanted them to move and aimed my feet towards safe landing spots. Yet again, I encountered Mark. Honestly, I just wanted to run and not talk. Instead of making small talk, I pushed through the uphills to create distance between us. Sometimes you just have to focus on one thing. A few miles later, my legs started rebelling. I had to slow my downhill pace or I would blow myself up. Mark caught up to me. “Hi there!” He said happily.
“Would you like to pass?” I offered. I didn’t want to slow his momentum.
“Oh no, I should go your pace. This way my knee won’t start to bug me. I am getting over a recent knee injury.”
“Yeah I know,” I had no patience for this.
“I live in Boise.”
“I have lived in McCall,” I said for the third time trying to remind him of our earlier conversations.
“Oh COOL!” He still didn’t recall.
I don’t mean to sound like an asshole, but at this point I was thinking that this is 30-some miles of running. NOT 30-some odd years of marriage. There is no reason why I should have to hear this entire story three times in one day. I am not that nice of a person so I picked up my pace hoping to lose him. I couldn’t, but by now we were running fast enough that he couldn’t talk. Perfect. Even better, I spotted a hat I recognized over the next knoll. “JIM!” It was Jim, and he joined our running group. This was sweet cause Jim is one of my favorite people to run with and I hadn’t seen him the entire race.

The last stretch is mostly flat and around Cascade Lake. It was very serene and a great last few miles for ending a race. Michelle caught up to us at the lake. The trail winds along and crosses a large, picturesque bridge. It was at this bridge that I realized we might finish in less than 7 hrs. I picked up the pace hoping to have Michelle follow my lead. How sweet would it be for Michelle to finish her first race in that fast a time? Unfortunately this didn’t happen, but we were close.

I would have loved to have gotten to congratulate Michelle again but in the whirlwind of finishing a race, I didn't get a chance. I went over to Pablo Cabrera - who was nice enough to have volunteered his day to help with the finish. That is the great thing about these races; runners hanging out, cheering each other on, and helping each other. Even James Varner, the race director and mastermind of Rainshadow Running, is always at the finish waiting to congratulate each runner.

Upon arriving at the ferry, we learned of a mechanical issue that held up our departure for a few hours. Could have been worse. I had Pablo and Seth in my car and it was pure comedy. Seth was all kinds of fired up and almost everything out of his mouth made us laugh. Pablo was kind enough to go buy ice cream for the three of us and walk around on occasion to see the status of our ferry. During the Powerline section I decided this was my last year doing this race. Obviously I had gone temporarily mad, because we were already talking about next year. “Next year I will be sleeping on the island the night before the race,” Seth said.
“Yeah me too,” I agreed, and I can’t wait till next year. 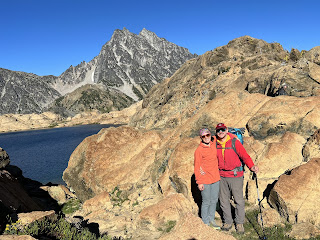 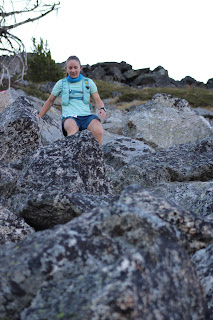 Krissy Fagan
This blog is a mix of my adventures in the mountains...mostly. Posts pertain to trail running, climbing, mountaineering, snowboarding, and the occasional home renovation mishap. I try to put an emphasis on having fun and learning about myself and my surroundings.